The FACTS DO matter!

This chart (click on chart to enlarge), prepared by MSU Extension for Muskegon county, clearly sounds a warning not heard by our county spenders.
"...beginning in 2011 expenditures will rise faster than the rate of inflation over the next five years. Consequently, expenditures are projected to be greater than revenues for EVERY YEAR THEREAFTER".
We have hit the iceberg and our "leaders" are more worried about ordering their own dessert than lowering the lifeboats!
Our county leaders continue to spend and the employee contract negotiations (80% of total county spending) are being negotiated without ANY commissioner input.
In other words, union negotiator negotiating with union friendly negotiator.
The resident of Muskegon has NO seat at the table.
Posted by Jim Riley at 9:31 PM No comments:

"Free laptops" tells us a lot about those commissioners.

This is the story of a mindset.
This week, five county commissioners (Bob Scolnik, Marve Engle, Ken Mahoney, Anthony Longmeyer and Scott Plummer) voted to have the county buy themselves "free" laptops (using a fund intended to purchase flower's for the deceased.) and double the cost with "free" software and professional setup.
The same laptop you or I could buy at Best Buy for $350, they found available for $800.(thankfully the motion failed)

This purchase was necessary, the "freebie-five" tell us, because "We need to move to the 21st century", "this will save money in the long run", "it will protect the environment" or even "computers are a tool just like a shovel and our employer must supply us with free tools".

But county leaders tell us that times are tough, cuts will be made, taxes may go up.

Our county currently has over $100 MILLION dollars in unfunded pension and health benefits for county employees. That means we ain't got the money to pay for all those retirees!

And  the commissioners just voted to spend $44,000 (and up to $160,000) for a consultant who will undoubtedly consul them that we need a new multi-million jail.

So if it were me or you, we'd realize we're just about BROKE!

And those "compelling" arguments of the commissioners......well maybe you'd see some of them already using computers during the meetings. But you wouldn't because none do.

Funny thing is, most of the commissioners already own laptop computers.
Only Bob Scolnik has even brought his to a meeting and discarded it early in the meeting to go back to the more convenient paper agenda.
His poor laptop never saw a commission meeting again.

The fact is, if the "freebie-five" commissioners were really serious about cutting costs, they'd demand an end to the wasteful mailing of county paper to their homes. They are in the building TWICE every week! Why are we mailing them ANYTHING?

If they were really serious, they'd move themselves "into the 21st century" with the laptops they already own. But they haven't done that.

If they were really serious about saving the county money, those that don't already own laptops would buy one with the $35,000+ per year compensation they already receive. But they haven't.

If they were really serious about protecting the environment, they'd demand an end to the wasteful mailing and excess printing of documents. But they haven't.

If they were really serious, they wouldn't pretend that six or seven meetings a month is the equal of a full time job. But they have.

If they were really serious, those who already have laptops would already be using them at every county meeting to save the planet, save Muskegon taxpayer's money, show that THEY are in the 21st century and prove how much more efficient the laptop is than paper. But they haven't.

If they were really serious, they'd see that even though this is only a few thousand dollars, the symbolism of their own actions would be a positive motivator for all of the county to realize that times are tough and we all need to do our part. But that's not what they did.

Sadly, their actions belie their words.

They're not really serious at all.

They are just like little children in a toy store, demanding more and more "free" toys from a hardworking Mom who is simply out of money.

And it is just that mindset that has our county in such a perilous financial situation.
Posted by Jim Riley at 8:55 AM No comments:

Mr Commissioner, tear down this wall!

Once again lots of big spending at the county commission meeting.
And once again, the votes of the spenders are hidden from the voters.
The wall of secrecy sure isn't for our benefit.
When commissioners vote in committee, EVERY vote they make to spend your money hides who voted for what.
Just a notation "motion passed" or "motion failed" (a VERY rare occurrence).
What do they have to hide?
Lots!
Scolnik, Engle, Mahoney, Plummer and Longmeyer just voted for free laptops for commissioners. The vote failed but their votes won't be public or added to the minutes because the board doesn't allow committee it.
You think they'd be proud...yeah right.....
Call your commissioner and demand they tell us how they voted!
Posted by Jim Riley at 7:07 AM No comments:

County board outrage of the week!

Lots to be outraged about and it's only Tuesday:

To authorize the Administration to solicit a proposal from RQAW Consulting Engineers and Architects to complete a Feasibility Plan for the Muskegon Prison facility. $44,200 (NO BID contract!)

To authorize staff to apply for funds from the Homeland Security
Department under the Port Security Grant Program (CFDA 97.056) in the
amount of $1,000,000 (one million) dollars with no match. ($1 MILLION???)

To authorize staff to apply for funds from the Homeland Security
Department under the Emergency Operations Center Grant Program,
CFDA 97.502 in the amount of $100,000 with Central Dispatch providing the 25% match ($25,000). ($ 1 million isn't enough?)


To approve the revisions to the Muskegon County Board of
Commissioners' Personnel Rules 1,5,9, 14, 17, 18,20,23,29,32
and 33. (read these changes. You can get fired if you don't identify yourself as a county employee when you are on line. Whistle blowers will get fired if they out badness. Not good at all!)

To approve an increase in the Initial Assessment rates for both Mercy Health Partners Life Counseling and Catholic Charities West Michigan to $90.00 per assessment from $60.00 and $70.00 , respectively. Authorization is also requested to increase the caps for both of their Community Mental Health Outpatient Mental Health Contracts to $20,000.00, effective May 1, 2011 through September 30,2011.

To authorize the Public Health Department to create and fill one Community Nutrition Specialist position to be funded 100% with WIC federal funds, with no effect on county general funds.

To authorize the Human Resources/Employment and Training Department to solicit bids for an entity(s) to provide Energy Conservation Apprenticeship Readiness (ECAR) services for jobseekers from the City of Muskegon Heights.

The Community Development Director position is responsible for oversight of the Community Development Department as created in the FY2010 budget which consists ofthe Convention and Visitors Bureau (CVB), the Muskegon County Airport, and the Muskegon Area Transit System (MATS). The position has been vacant since October 1, 2009; in the absence of the position the County Administrator has assumed the oversight responsibilities of the department programs. Based on other Director positions in the County with the same level of responsibility the pay scale should be upgraded from ND00018 ($65,944 -$84,126) to ND00030 ($72,831 -$92,749).


And chairwoman Susie Hughes' new facebook page "Muskegon County-board" is an amazing compendium of information.
You MUST check it out!
And that is great!
But our own little county is 100 MILLION in debt to unfunded pension and health benefits for its employees.
And the big spending left has been hard at work trying to recall the governor and many GOP Michigan reps. and senators.
And showing their strength at rallies statewide.
"Keep up the spending and more" is their cry.
If they win, your children and grandchildren will lose, big time.


Our meeting tomorrow night will focus on how WE THE PEOPLE (those who pay the bills) can bring our quest for rational spending and accountable government to those who don't know what us TeaPers are really about.
And after the regular meeting at around 8:00 is over, Susie will present easy to use pointers for those who want more help in connecting with the "social media" like facebook, twitter, M-Live and other media.
So see you Tuesday!
Come alone or bring a friend... or two!
Remember, as our lovable Captain Bertch has so often said "they don't understand we're broke"!
Jim Riley
"It's the SPENDING Stupid!"
Posted by Jim Riley at 8:47 AM No comments:

Most every Tues. and Thurs. 2:00-3:15 political chat at Carmen's Cafe.Today has 2 interesting items:

1. $80 grand to train 10 Heights kids for jobs in the construction business......you might ask "what jobs". They probably won't.
2. Remember the big millage that raised money to redo the Frauenthal and the Walker.
Well, that money has been paid back but the county wants to keep the millage and spend the money on......well, they don't say.

We'll talk about that today at 2:00
Everyone invited.
Just ask for Riley!
Posted by Jim Riley at 12:11 PM No comments: 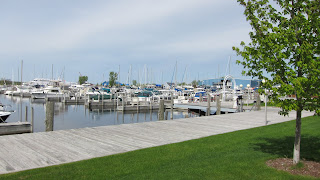 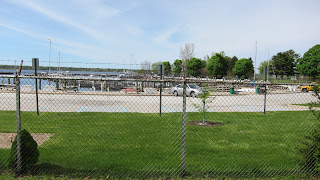 My letter to Muskegon county commissioners

On May 19, a gentleman who appeared to be blind, was led into the commissioner's board room and asked if this was the Transportation committee meeting.
Unfortunately, that meeting had been canceled two days earlier. ( http://co.muskegon.mi.us/boardofcommissioners/minutes/waysmeans_11_05_17.pdf    pg. 4 "New Business")
The unfortunate citizen had no way of knowing the committee meeting was canceled unless he'd read the minutes of the ways and means committee meeting posted online two days before. The agenda for the Transportation Committee was left with a dead link for the day. He quietly accepted his inconvenience. No board member offered an apology.

Last week a, highly unusual, special meeting of the Public Works committee was called at the beginning of the Full Board meeting.
"AWARD THE CONTRACT FOR “COST OF SERVICE CONSULTING” TO
PERFORM A RATE DESIGN STUDY FOR THE WASTEWATER SYSTEM
PER THE SPECIFICATIONS IN RFP 11-1884 TO UTILITY FINANCIAL
SOLUTIONS FOR $24,585."
There was no explanation why this hurried, special meeting was needed just 12 days after the last Public Works meeting. It was simply put in front of the commissioners with little time for them to vet or understand, voted on and voted on again a few minutes later by the full board.
There was no public notice of this special meeting.

The commissioners have recently called for monthly "planning sessions". These are important, intensive and informal meetings intended to address major issues facing our county. They are also, by law, public meetings requiring adequate notice to the public. There has been a board policy of providing no specific public notice for the date, time or location of these meetings. Sometimes a mention in a committee's minutes. Sometimes not even that. One would have to read, in great detail, every one of the committee or full board minutes to find this nugget of information. If it was available at all.


Our commissioners will soon face tremendous challenges as they try to maintain county services and keep our county solvent.
They will need more than citizen committees and consultants to deflect the criticism likely to arise from the tough decisions ahead.
They will need the confidence and good will of the citizenry.
A citizenry that trusts our county leaders are honest and up front with the issues we all face.

Gentlemen and gentle lady, this e-mail is not just a complaint.

It is a request that you all support changes that will address the problems of communication with those who have given you your great responsibility and their trust.
Posted by Jim Riley at 9:33 AM No comments:

Let them know you exist!

2020 Muskegon County Board of Commissioners